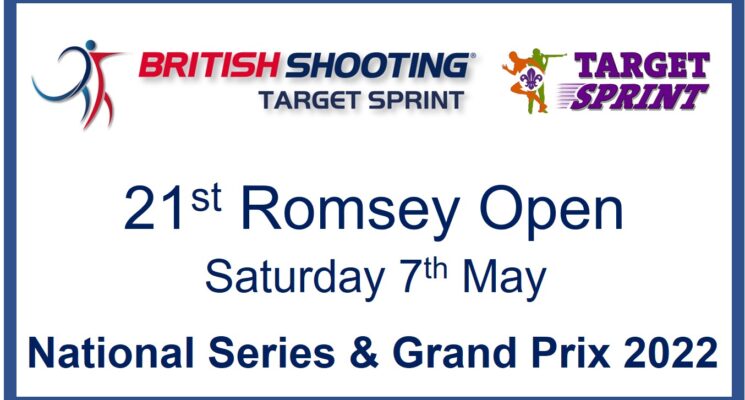 Event will be held on 7th May 2022 at the 21st Romsey Scout HQ and the jubilee park field.

A poster can be downloaded from the following link.

Entry to the event will be via Eventbrite this year. Cost is £8.00 including Eventbrite fees.

Link to the Eventbrite site to purchase your tickets is >> HERE <<

Please ensure you complete the competitor details as this will be used for entry to the relevant category.

We are planning 2 events in Southampton for 2018

The first on 7th April 2018 is currently being planned as a GB Team Pre-Qualifying event. This is being planned to be hosted at Southampton Sports Centre Athletics track. Please refer to British Shooting Targetsprint.com website for more details.

The second on 12th May 2018 this will be our annual event at 21st Romsey Scout HQ and open to both scouting and non-scouting members.

Entries Closed and Times Sent out

If you have not received your start time for the 2017 event then please contact me asap as all have been sent out to you by email.

Look forward to seeing you all at the event.

We have 48 Entries this year, good luck everyone.

We would like to thank Sure Shot Airguns for their sponsorship of this event.

We have announced the date for the 2017 competition being 6th May 2017. Our new friends and competitors from the Netherlands have confirmed they are looking forward to attending again.

We are pleased to announce that we now have a total of 46 entries with a couple of possible entries still to be confirmed.

This years competition will be interesting with the Open Class including competitors from the Netherlands, South Africa and the UK.

We wish all the competitors good luck in the competition and welcome guests on the day to watch and cheer everyone on.

AS per last year we will be running a tin can pistol shooting area outside.

Additionally this year we will also have sideline Bell Target Competition.

Bell Target Shooting is amongst the oldest Pub and Club sports in the country. It started in the 1890’s after Queen Victoria was advised about the poor standard of shooting during the Boer War. Promoted by the likes of Lord Ednam and Baden Powell (Scouts Founder), by 1905 there was 1600 teams in Birmingham alone and 4000 nationally. Bell Target shooting is usually an indoor sport using .177 Air Rifles shooting at an all Steel Bell Target at a distance of either 6 or 7yds. We will be shooting this outside.

Anticipated Costs for each Additional Activity £1 per go.